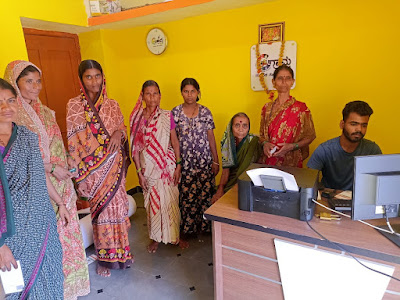 * A single-window centre for serving citizens at the village level

The number of beneficiaries of GramaOne – the Government of Karnataka’s flagship programme delivering citizen services at villagers’ doorsteps across the State – has crossed the one-crore mark.

The landmark achievement comes within nine months of the launch of the scheme on January 17, 2022.

On achieving the one-crore mark, V Ponnuraj, Secretary, E-governance Department, GoK said, “Getting the government closer to the people's doorsteps is the objective of GramaOne. Also, most of the time, these citizen service centres become unviable. So, this time we have made it viable in such a way that the focus on the service remains simultaneously; it is also viable by providing the right combination of services.”

He added, “I foresee the future for this program is that this has to live as long as village people are digitally not as equipped as the urban population. Once the rural people also become equally competent in handling digital systems, the importance of this system will probably come down. But still, it is a long way to go. Till then, whether it is a service delivery or governance system, it should become a one-stop shop, and it should be able to improve the happiness of the citizens.”

Varaprasad Reddy B.N., Project Director, GramaOne, said the villagers’ ease of obtaining government services is at the core of the programme. “GramaOne is envisaged as a single-point assistance centre for all citizen-centric activities at the village level, and it has had a phenomenal success across all the 31 districts of the State, with as many as 1 crore people benefiting from the programme,” he said.

“GramaOne is, in fact, a realisation of the dream of Swaraj of Mahatma Gandhi and Suraaj of Atal Behari Vajpayee – two great visionaries who wanted each citizen of our country to be empowered. The scheme is at the frontend of the Karnataka government’s Seva Sindhu initiative,” he said.

Mr. Reddy said that though the social welfare programme has achieved an exponential growth in such a short span of time, he asserts, “Much has been done, much more needs to be done. The government is planning to open another 1,600 GramaOne centres in addition to the existing 7,112 centres. The aim is to have at least one GramaOne in each gram panchayat in the State.”

“Currently, about 800 services – like G2C (government to citizens), B2C (business to citizens), banking services, and RTI (right to information) queries – are being delivered through the 7,112 centres in all the districts of the State,” he said.

The programme is being implemented in a public-private partnership model. Sanjay Kumar, Project Head, BLS International Services Ltd., the implementing agency, said, “The government has provided all possible facilities so that the franchises can deliver the best possible service to the citizens. Under the GramaOne programme, several qualified, skilled, and trained operators help the village residents or communities receive and comprehend the numerous services.”

The primary reason for the government to initiate this programme is to help the villagers in availing of multiple government services without having to travel long distances to visit the district, taluk and Hobli offices. Thereby they save time and money.

Mr. Reddy said time is of great importance for farmers. “Getting basic services without spending much time travelling long distances is a big advantage for them. Something that can even increase their productivity and make them and their families successful. Thus, saving on the transportation cost, opportunity cost, operational cost, and no nonsense value,” he said.

“These centres, operational from 8 am to 8 pm, also free the citizens from the menace of middlemen. Besides that, the timely delivery of quality service boosts socio-economic development,” he added.

Highlighting the role played by each GramaOne centre in ushering in financial inclusion, Mr. Dileesh Sasi IAS said, “In a major economic initiative, the Union government on August 15, 2014, unveiled the Pradhan Mantri Jan Dhan Yojana as part of the National Mission on Financial Inclusion. This scheme – aimed at providing everyone, including the underprivileged, access to banking facilities – allows opening a bank account with zero balance. GramaOne centres acting as a micro-banking institution is a step in that direction. Since the opening of these centres, we have noticed a very interesting trend at the village level, as we see higher percentage of people applying for PAN card enrolment, which is being facilitated by GramaOne.”

This initiative encompasses a variety of communities and franchisees that help run the GramaOne centres, thus providing employment opportunities at the village level. Mr. Sasi said, “The budding entrepreneurs are fully trained to provide all services to the citizens. Periodic training is given to these franchises to update and upgrade their skill sets to provide better citizens’ services and be fully financially independent.”

This is the future

Thanking all the stakeholders, Mr. Reddy said, “We are seeing a new scenario wherein citizen services are provided in three ways – one, online; two, via franchises; and three, doorstep delivery.” He said, GramOne is the beginning of a new dawn, of a new future.

Posted by editor-manu-sharma at 3:54 PM