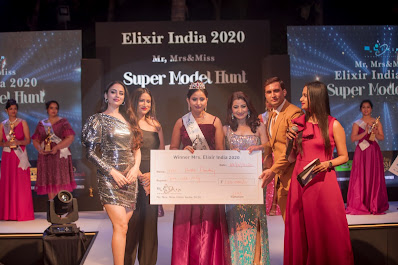 A Grand event for Miss, Mr and Mrs Elixir India 2020 supermodel hunt was organised by Elixir World Productions House at Goldfinch Retreat, Devanahalli, Bengaluru on 22nd December which witnessed celebrities like Zoya Afroz, Sufi Khan, Raghu Mukherjee, Shashidhar Kote who crowned the winners of all these categories. Mrs. Pallavi Kaushik and Mr. SarthakChoudhary helped groom the participants for the Fashion Show and made sure they looked amazing and confident on stage. The Honourable Chief guests Mr Ritesh Reddy, Mr. Arun, Mr. Priyank, Ms. Kajal Agrawal and Ms. Khushboo Jain were honoured by the Elixir team.

Generally, Beauty Pageants are conventional in its kind, But Elixir Pageant gave opportunity to candidates irrespective of Height, Weight, Colour and their Profession. Elixir India 2020 also proudly provided a stage to participants who were Divorced, Separated, Single Mothers etc to showcase their talent. The participants were picked from remote corners of India like Roorkee, Amravati, Raichur and others.

Elixir World Productions House (EWPH) was started by six women, who are national pageant winners from different parts of India with a vision to fulfil dreams of people who have potential but don’t have any guidance or a platform to perform. Elixir India 2020 is a National Fashion Pageant from the Elixir World Production House.

Half bunch of women see a dream together and craft it into Elixir World Productions House, with a mission to hold hands of dreamers from small towns and cities who don’t get enough guidance & exposure and walk with them towards their first step to success.

We are one of the country’s most esteemed national pageants, Elixir. We are a team who believes that the joy of being creative is beyond words. We Elixir, are a Bangalore based prestigious production house with its local associates all over the country. We have worked with many of the India’s top agencies and marketers.