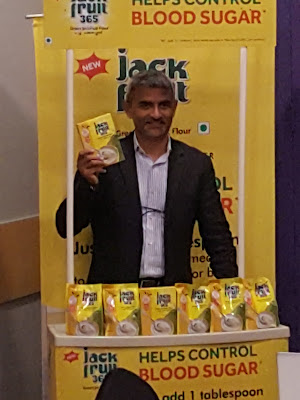 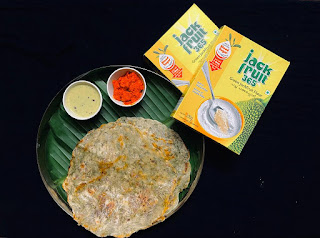 A press meet was held at Bengaluru to discuss measures that could prevent 50% of type 2 diabetes (T2DM) in the world. This press meet was part of Jackfruit365.com’s initiative to spread awareness on consumption of healthy food, which is in support of the World Diabetes Day campaign ‘Access to Diabetes care’ themed ‘Education to protect tomorrow’ this year.

The gathering laid emphasis on the World Diabetes Day campaign fact that 50% of type 2 diabetes (T2DM) in the world can be prevented by the intake of healthy food and exercise. Adding more vegetables to meal plans is the most important part of making food healthy, thereby helping in managing diabetes condition naturally. Jackfruit365™ green jackfruit flour is a vegetable in flour form which can be easily added to traditional food people prefer like akki roti in Bangaluru, pesarattu in Hyderabad or podi idli in Chennai. The high fiber content, and low calorific value, in green jackfruit flour is shown to reduce HbA1c in patients with type 2 diabetes (T2DM).

Renowned Doctor Vinod Abichandani, emphasised on integrating green jackfruit flour in daily meals to control blood sugar among people with diabetes. The discussion was focussed towards supporting diabetes healthcare consultants and educating the masses on the incorporation of green jackfruit flour, a simple plant-based natural remedy, in daily meals to control blood sugar, help optimise bowel movement, some lipid fractions and markers of fatty liver as well. A balanced plant-based diet provides the required vitamins, minerals as well as carbohydrates. In addition, dietary fiber or roughage is also a part of plant-based foods, promoting weight loss and lowering the risk of diabetes.

Dr. Vinod Abichandani, Diabetologist and Endocrine Physician, Ramanand Clinic, Ahmedabad said, “I recommended my patients to use 30 g  Jackfruit365™? green jackfruit flour per day to replace same portion of whole wheat flour or rice batter as part of their diet and observed a remarkable improvement in their blood glucose levels. Today, at least 50 of my patients including pregnant women, my family and staff are using 30 g of green jackfruit flour on a daily basis and the benefits are visible in overall metabolic conditions than just blood sugar control. Green jackfruit flour is a real nutritional gem for medical nutrition therapy ”

On this occasion, Mr. James Joseph, Founder, Jackfruit365.com said, “Diabetes is a serious & rapidly growing lifestyle health issue in the world. There are more than 70 million people suffering from diabetes which is expected to rise over 134 million by 2045. Adding just one tablespoon of Jackfruit365™ green jackfruit flour in one’s meal three times a day will help reduce the absorption of carbohydrates and calories and facilitate twice the amount of fiber intake, without the need to change one’s dietary preferences. The Government Medical College, Srikakulam, Andhra Pradesh has been instrumental in bringing forth the benefits of green jackfruit flour in medical nutrition therapy for diabetes; this rooted deep trust in the green jackfruit flour’s ability to control diabetes, thereby benefitting lakhs of people.”

Consumption of 30?g green jackfruit flour per day (equivalent to three tablespoons per day or one tablespoon per meal) results in control of blood sugar. It also adds to the increase in intake of vegetables, which leads to a healthy overall diet and clubbed with exercise, helps in prevention of 50% of type 2 diabetes. Further to the clinical study and these remarkable improvements observed by leading diabetologists, Jackfruit365™ advocates the usage of green jackfruit flour as a key ingredient in medical nutrition therapy (MNT) for diabetes management and prevention, including obesity management, as well as a carbohydrate replacement to fight dietary diseases.

Mr Joseph also added “It is one of the most gifted food products online, being largely gifted by children to their elderly diabetics. To make it easier for the diabetic patients to purchase from their local supermarkets & pharmacies, Jackfruit365™ is expanding its retail distribution from Kerala to Andhra Pradesh, Telangana State-wide and to the cities of Bangalore &  Chennai.”

The glycaemic load (glucose level) in green jackfruit is almost half that of rice or wheat; this makes it a potent carbohydrate substitute in the diet for diabetic patients. Green jackfruit flour can increase soluble fiber and reduce the energy density and glycaemic load of a majority of traditional Indian meals. Owing to a neutral taste without a strong aroma, it makes for an easy integration with majority of staple foods across India - from roti, poori, paratha to dosa, idli, upma to oats or porridge - thus, making wholesome meals healthier and maintaining the pleasure of eating.  It can easily be used with daily meals as well, such as with a cup of curd before major meals. Since green jackfruit flour blends beautifully into most recipes, it can also change the way we look at health foods and gluten-free foods in particular.

Posted by editor-manu-sharma at 6:17 PM