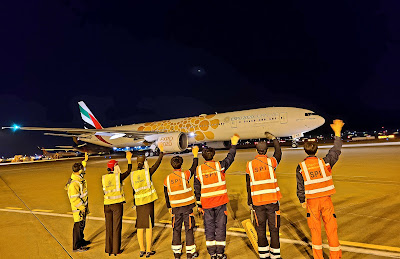 As per UAE government directives to protect communities against the spread of COVID-19, Emirates has temporarily suspended all passenger flights from 25 March 2020. The airline will resume passenger services as soon as it is possible to do so. In the meantime, Emirates is still busy deploying its fleet of Boeing 777 freighters, bolstering international air cargo links for the transport of vital goods, including medical supplies and food, around the world.

Emirates’ 34 years in India have been defined by progressive investment, partnership and growth. In October 1985, Emirates launched flights from its Dubai hub to Delhi and Mumbai which formed the base of its initial route network. Since then, Emirates has grown its India operations to serve a total of nine destinations across India – Ahmedabad, Bengaluru, Chennai, Delhi, Hyderabad, Kochi, Kolkata, Mumbai, and Thiruvananthapuram – with 170 weekly flights. The Emirates Group currently employs more than 13,700 Indian nationals globally, most of them in high-skilled employment. Globally, the airline flies to 157 destinations in 83 countries and territories.
Posted by editor-manu-sharma at 3:35 PM