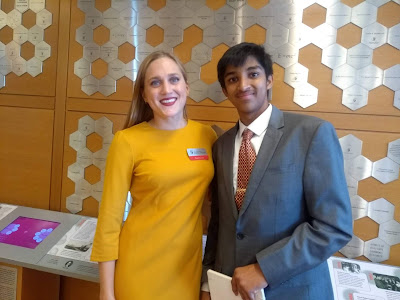 Monish Singhal, a Grade 10 student studying in VIBGYOR High - Marathahalli was invited to the ‘Global STEM Alliance Summit 2019’. He was a part of the team ‘Fighting 7000’ which won ‘The Fall 2019 challenge on Genomics’. The summit was organised recently at the headquarters of the New York Academy of Sciences, a prestigious organisation whose members range from celebrated biologist, Charles Darwin to the renowned astrophysicist Chandrasekhar Subrahmanyan and reputed physicist Nikola Tesla.

The winning team ‘Fighting 7000’ comprised of five other international high school students and a professional mentor, who together secured this prize. They provided an end-to-end four-part solution, covering several aspects including the identification and treatment of rare genetic disorders. The team defined primary problem as: “Creating rare disease testing program”, to encourage genome sequencing at birth, and developing a rare disease test kit that is affordable, reliable, and simple to use and ensuring the protection of patient’s personal data when they are shared with research institutions, and empowering local communities with access to rare disease expert consultations. As a part of the winning team, Monish and his teammates presented their solution to the officials at the challenge sponsors Medidata and Regeneron Pharmaceuticals during the summit.

“I had always dreamt of being a researcher in STEM [Science, Technology, Engineering and Mathematics], with the dream of changing the lives of millions of people. The project was an eye opener for me to the reality behind rare diseases. In India alone, there are about a million people who are known to be affected by rare genetic diseases. However, there is no government  policy on the same granting relief to such people who have to bear the brunt of luck, and shell out several thousands of rupees monthly just to stay alive.’’ Said Monish Singhal.
Posted by editor-manu-sharma at 4:22 PM