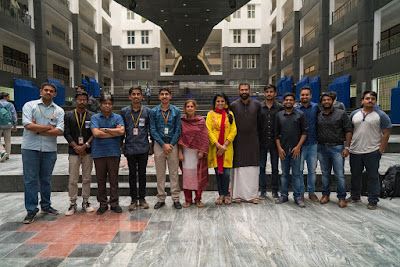 In a presentation of cutting-edge innovations in the field of emerging technologies in India, 21 talented students from the Facebook School of Innovation will be showcasing their work to a panel of industry leaders on February 23 at Royal Orchid Regenta in Bengaluru.

As part of the Facebook School of Innovation VR Day Programme, co-created by Facebook and Startup Village Collective (SV.CO), the brightest minds of the country will get an opportunity to exhibit their talent through product prototypes designed using Virtual Reality.

The participating students, shortlisted after a nationwide exercise covering some of the best engineering schools, underwent an intensive six-month developer-training programme under the mentorship of five professionals who are experts in the field of emerging technologies. The purpose of the VR program, built in collaboration with industry partners Scapic and Unity, is to impart key skills required to build a world-class VR prototypes.

Speaking about the steep learning curve that the students showed during their programme, Suma Sundararajan, Programme Head and Chief Operating Officers of SV.CO, said: “Through the School of Innovation, we now have students who have transformed themselves from being enthusiasts in an emerging technology to become industry-ready, professional VR developers who are capable of building stand-alone VR applications. Students now have a choice to use their skills to take a job, build their own startup or go for masters in areas like Gaming or Machine Vision.”

Satyajeet Singh, Head of Platform Partnerships for India and South Asia, Facebook, added:“With disruption being the new norm driving the Indian technology ecosystem today, we want to equip our budding entrepreneurs with the latest in emerging technologies and enable them to become problem solvers of tomorrow. The Facebook School of Innovation and the VR Day Programme seek to encourage the spirit of entrepreneurship in Indian students and impart them with relevant skill sets, to bridge the gap between academia and industry requirements.”

Trained in a comprehensive and in-depth industry curriculum, the student developers also learnt about the global best practices through multiple online sessions with Global Virtual Reality experts. In terms of the practical aspect of the training, the students were provided Oculus GO VR Devices to build their respective applications and product prototypes. These technological innovations will be demonstrated at the event, which will also be attended by an array of vice-chancellors, members from state startup missions, fellow students and parents.

Launched in December 2017, the Facebook School of Innovation Programme is designed with an objective to give industry exposure to engineering students in India in emerging technologies and help them to build their ideas into next-generation, globally marketable products and services.

With an aim to spread awareness in the emerging field of Virtual Reality, the School of Innovation programme conducted a series of workshops for nearly 5,000 students across the country, of which three talented developers will be given the chance to showcase their work at the VR Day.
Posted by editor-manu-sharma at 3:09 PM