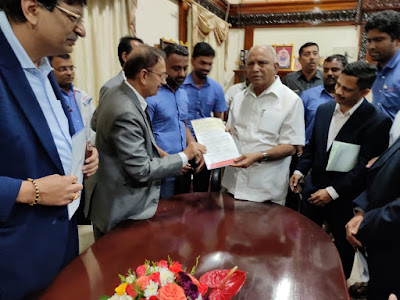 This voluntary initiative by Toyota and its employees amassed strong support for the swift relief activities currently being undertaken by the authorities.

Further to the assessment of the on-ground realities and magnitude of the devastation, Toyota Kirloskar Motor jointly with its 6,000 plus employees, initiated a collection drive, where the employees wholeheartedly came forward to donate a day’s salary contributing to the betterment of the lives affected by the aftermath caused by the floods in Karnataka. The companies made a matching contribution to the employees contribution for the relief fund.

As a responsible corporate citizen, Toyota has always been at the forefront of supporting the society in addressing critical social issues. The company made some key contributions to rebuild lives in the affected regions of Kodagu District (Karnataka) and Kerala, post the floods and landslides last year. Furthermore, as part of its employee voluntary initiative – ICARE, TKM employees came together to provide ‘Emergency Relief Kits’ to the families affected by the aftermath caused by Cyclone Fani in Odisha, earlier this year.

Toyota stands with the state of Karnataka in this time of crisis caused by the floods and landslides, claiming unprecedented loss to lives and property, and prays that life in the affected regions take a speedy return to normalcy.
Posted by editor-manu-sharma at 10:48 AM