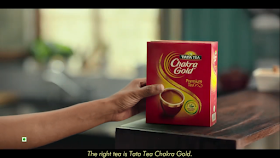 Tamilians are proud of their rich culture that has many claims to fame; that of a rich literary legacy, iconic architecture, of Tamil being the longest surviving language, a vibrant cinematic culture and most importantly their contributions across all spheres such as art, science and corporate world  . The driving principle of all such achievements of both, individuals and a collective, have been the principles of great discipline and a deep respect to tried and tested processes. Driven by quest for perfection, Tamilians take great pride in their methodical approach to all things in life and an eye for great detail.  The new Chakra Gold campaign for Tamil Nadu is a celebration of this very uniquely Tamilian code of life that is evident even in day to day situations.

The film, conceptualized by Mullen Lintas, opens in a traditional meal area of a Tamil function where server, who is placing banana leaf in a certain direction, is stopped by his supervisor who shows the ‘right way’ of placing it. More such life illustrations follow, all showcasing the Tamil penchant for doing every little thing in a certain methodical way and the right manner. The film ends with a scene where we see the same penchant for process being demonstrated by a young boy who copies his father in tying a veshti around his waist, diligently. In all these situations, the most interesting character is played by the VO of an uncle, obsessed with Tamil processes and corrects people whenever they make a mistake. He is the uncle in every Tamil household whose perception in the family is like a custodian of Tamilian code of life and someone who doesn’t hesitate in calling out the mistake even in most harmless situations. When it comes to the process of making good cup of tea, the ‘Uncle’ recommends Tata Tea Chakra Gold as the tea for Tamilians. Film ends with showcasing all protagonists enjoying the perfect cup of Tata Tea Chakra Gold.

Commenting on the campaign in Tamil Nadu, Puneet Das, Vice President-India, Tata Global Beverages says, “Tata Tea Chakra Gold is a blend specially crafted for Tamilians and celebrates the Tamil way of life. Its new campaign is about evoking regional pride of Tamil Nadu that is rooted in understanding the importance of discipline and processes in the life of a Tamilian. Similarly, Tata Tea Chakra Gold made from a rigorous process enables consumers to make the perfect cup of tea”.

Highlighting the insight behind this campaign, Chief Creative Officers at Mullen Lintas, Garima Khandelwal & Azazul Haque, said “Regional insight and truth of inherent everyday behaviour that evokes pride and empathy as a reason to consume Tata Tea Chakra Gold. It positions the brand as a ‘go to’ tea by keeping the consumer at the center using the analogy of the process followed for making it. Similar to the people of Tamil Nadu who drink it, making it the ‘tea of the state’. Simply and beautifully told through the voice and visual grammar that is natively Tamil Nadu.”

The brand’s new campaign combines the logic of 'processes' and the emotion of ‘regional pride' with a touch of witty storytelling and relatable instances for every Tamilian.

Tata Tea Chakra Gold is the second largest tea brand in South India and ninth largest across India, in terms of market share. Originally launched in 1985 as Chakra Premium Dust Tea, the product was renamed Chakra Gold in 1989. Over the last 30 years, it has built a strong equity in the markets of Tamil Nadu and Andhra Pradesh. Tata Tea Chakra Gold is one of the leading packaged dust tea brands in South India with a strong heritage of 34 years. It is predominantly sold in states of Tamil Nadu and Andhra Pradesh.  Made from the choicest Assam teas, known for their strongest flavour, Chakra Gold is loved for its strong and lingering taste. With the restage of mother brand and launch of Tata Tea Chakra Gold variants - Activ+ & Elaichi, Tata Global Beverages Ltd. intends to strengthen its portfolio play and build equity in the fast growing premium tea segment in South India.

Tata Global Beverages is a global beverage business; its brands have presence in over 40 countries. The Company has significant interests in tea, coffee and water and is the world’s second largest tea company. 330+ million servings of its brands are consumed everyday around the world. Tata Global Beverages Group has an annual turnover of approximately US$1.4bn including from its JV’s and associates; it employs around 3,000 people across the world. The company focuses on natural beverages and has a stable of innovative regional and global beverage brands, including: Tata Tea, Tetley, Himalayan natural mineral water, Tata Water Plus and Tata Gluco+, Good Earth tea, Grand Coffee and Eight O’clock coffee.
editor-manu-sharma at 4:17 PM