‘Cryocure’, a New Cryogenic Device to Treat Piles Without Surgery 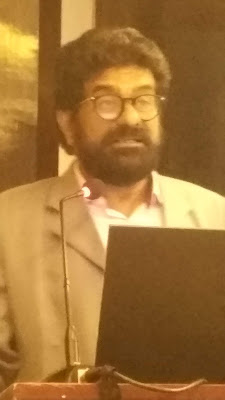 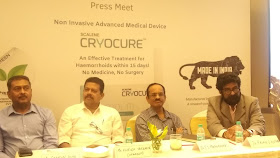 ‘Just cool it,’ goes the tag line. And when people say, pain in the wrong place, here is an easy solution. Dr. Rajah Vijay Kumar, an eminent Bangalore based scientist and inventor, with 30+ inventions to his credit, has now brought out ‘Cryocure’ – an affordable medical device to treat piles without surgery. He describes hemorrhoids, popularly known as ‘piles’ as the next lifestyle aggravated disease.

Cryocure was launched by the Chief Guest, Dr. T.S. Prabhakar, Director of Health and Family Welfare Services in the presence of Dr. Rajah Vijay Kumar, lead scientist in the development of this technology. Dr. Rajah is also the Global Chairman of Organization de Scalene - a 25 year old, Bangalore-based research center.

Dr. Prabhakar in his speech said, “Hemorrhoids is the most misused disease across the world. In India mostly quacks are treating Piles and Fistula. Many lives have been lost and deaths caused due to unqualified treatment of hemorrhoids. With Cryocure, we have a cost-effective cure at home. I wish Cryocure and Organization De Scalene the very best of luck”

According to Dr. Rajah Vijay Kumar, “Hemorrhoids, or piles, are one of mankind's most common and nagging disorders. It dates back to the times of Mahabharata, when Shakuni, the maternal uncle of ‘Kauravas’, is believed to have suffered from this disease. Another story recounts how Napoleon Bonaparte was defeated at the battle of Waterloo, as he was bothered by very painful thrombosed hemorrhoids. So intense was the pain on the morning of the battle that he could not command the army leading to his defeat and hence it came to be called the “Piles of Defeat.”

He adds, “today, Piles is a fast-emerging lifestyle risk, with nearly 330 million people suffering from Hemorrhoids globally. In India alone, 41 million have Piles with 1.2 million new cases reported every year. Nearly 60% of the population in South India suffer silently and seldom disclose their condition.”

Dr. Rajah continues, “hemorrhoids if untreated can lead to a bigger problem and also pose serious medical risks. Cryocure is a simple tube-like device filled with special Cryogenic memory agent. It is priced reasonably so it is affordable and can cure hemorrhoids without any surgical procedure or side effects. It is also safe for usage among pregnant women, diabetic and heart patients. Hemorrhoids are a common occurrence during pregnancy with nearly 40% pregnant women on the planet suffering from it. For all these reasons, it has received widespread acceptance in North Indian cities,'' he explains.

Cryocure is made of unbreakable medical plastic. The device must be frozen for two hours before use. Once removed, the cold Cryocure is dipped in coconut oil or Vaseline for lubrication before inserting into the anus at a temperature of -18 degrees C. The Cryogenic effect causes blood vessels of the hemorrhoids to constrict thus making them shrink. With regular use pain, itching, burning and blood loss gradually disappears. This treatment can be done in the comfort of your home.

Cryocure can be used only after confirmed diagnoses of hemorrhoids (piles). It is available across the counter at select chemist shops across Karnataka. For more information visit https://pilesfree.co.in/

Rajah Vijay Kumar, is a Bachelor of Science majoring in Physics, Chemistry and Mathematics, a post graduate in Microelectronics and a Doctor of Science in Medical Engineering (magna cum laude), and also holds a Master of Business Administration in Corporate Crisis Management. He is a pioneering researcher and an opinion leader in the field of Biophysics, Radiobiology, Nanotechnology, Sustainable Energy, Modern Telecommunications and Water resources management and Recovery. He is specialized in Electronics, Applied Chemistry and Medical Engineering. He has worked for 29 years on regenerative tissue engineering and high speed biological data acquisition, modeling and simulation of the human cardiovascular system, artificial intelligence and neural networks in medical diagnosis and engineering. He is the inventor of the Haemoseis 256, the (FDA approved) CYTOTRON, the FORN, the SPARSE, the FIT, the TMDR, the AQUARIA, the AQUATRON, the Private System for mobile communication etc., to name a few. He has more than 30+ patent inventions to his credit. He has many publications in medical and engineering journals of repute. He is also the Author of the book 'Cytonics' - a mystery of the living cell.

He is the member of the United Inventors Association (UIAUS), the Institute of Electrical and Electronics Engineers (IEEE) and its Engineering in Medicine and Biology Society (EMBS), the Fellow of United Writer’s Association (UWA), the Member of the American Chemical Society (ACS) and Genetic Society of America (GSA) and the Association of Computing Machinery (ACM).

He is the Group Chairman of Organization de Scalene, which includes the Centre for Advanced Research and Development (CARD), Scalene Energy Research Institute (SERI), Scalene Cybernetics Limited and also serves as the Chairman of the board of Directors for many global organizations.
editor-manu-sharma at 7:43 PM