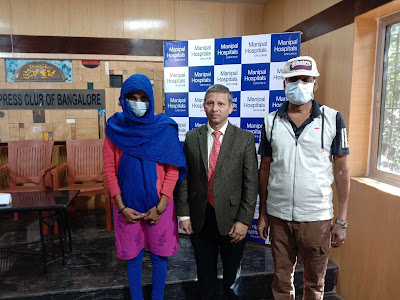 Sharing his thoughts on the successful transplant Dr. Ravichand Siddachari, HOD & Consultant HPB & Liver Transplantation Surgery at Manipal Hospitals Bangalore said, “The patient was suffering from chronic liver failure and his condition was critical. Infact liver transplant was the only hope for him. However, we had to be careful about the scar for the donor who is young and was apprehensive about the same.  The robotic arms and a camera were positioned inside the donor’s abdomen. The camera facilitated a 360-degree view, which enabled the robotic arms to remove part of the liver from the donor with absolute precision. The scar caused by the key hole camera was only about 10 cm, as opposed to almost 35 cm scar caused by an open surgery. Use of robotic arm has many advantages, which includes speedy recovery, precision, minimal loss of blood and hospital stay is minimized. The robotic arm can reach to small crevices, which human hands are unable to achieve and there is no surgical fatigue as well. Robotic surgery is usually performed for kidney, heart and Gynaecological related medical issues.’

Expressing her happiness over the liver hepatectomy the donor said, “Initially I was concerned about the scars on my abdomen but Dr. Ravichand and team assured me that the scars would be negligible as they will be using robotic arm to take out part of my liver. My family and I are extremely happy on the success of the transplant and I am feeling healthy. I have recovered well and performing my normal duties without any issue. We are extremely grateful to the support and care shown by doctors at Manipal.”
Posted by editor-manu-sharma at 6:05 PM