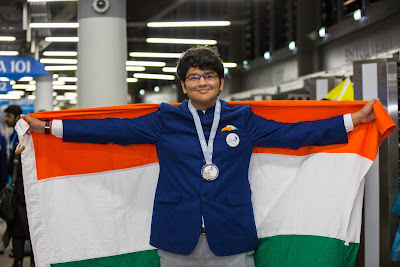 Blazing a trail of glory for India at the global stage, the Indian Team returned with the best-ever finish at the WorldSkills International Competition 2019 in Kazan, Russia by winning 19 medals and Medallions of Excellence. The 48-member Indian team won one Gold, one Silver and two Bronze medals besides 15 Medallions of Excellence at the competition that ended with a spectacular closing ceremony at Kazan yesterday attended by the President of the Russian Federation, Vladimir Putin.

Pranav Nutalapati, 17 years old,represented Karnataka and won Silver Medal in Web Technologies after competing with 33 countries. At the age of 17, when most students are trying to manage school, Pranav from Karnataka managed to affix his place in WorldSkills Kazan. His fervour for IT can be traced back to his father's profession, who is the General Manager at a leading Artificial Intelligence company. When most students play video games, Pranav was busy completing a three-month internship at Razorthink Technologies, aiding them in finding viable solutions to various technical issues. He has taken part in IndiaSkills three times, and each attempt featured him displaying magnificent capabilities.

With this historic triumph, Team India won hearts and set new standards of skilling on the world stage. India finished 13th in the overall standings several notches up from the last time when it won 11 medals and finished in the 19th position at Abu Dhabi in 2017.

The competition has become a grand event in the arena of vocational skills with several contenders participating from across the globe. This year’s challenge witnessed an increased participation with more than 1,350 Competitors from 63 countries and regions who competed in 56 skills to win prestigious medals. The competition was extreme and by returning with 19 medals, Team India has started a new chapter in the history of vocational skills. This does not only prove the talent of the team but showcases their strong dedication and commitment.

Congratulating the Indian team on their performance, Dr. Mahendra Nath Pandey, Hon’ble Minister of Skill Development and Entrepreneurship said, “It is a moment of great pride and joy for every Indian today. Congratulations to Team India on this historic triumph and for presenting a brilliant show. This win will be an inspiration to many other young Indians who will soon become a part of the skilling ecosystem. The winners and their experts will be rewarded as a token of appreciation for their hard work and sincerity that has brought laurels to the nation. Personally, it has been a moment of great pride, being a part of this competition and witness the scale and standards at which India competed at WorldSkills 2019. The event is truly the ‘Olympics of Skills’. This victory takes us a step closer to fulfilling Prime Minister Narendra Modi’s vision of ‘Skilled India’. I wish all the luck to the participants for their future endeavors and would also like to extend my gratitude to all the partners who made it possible for the Indian youth to make a global mark.”

The Minister was in Kazan last week to encourage the team at the competition. During his visit, he inaugurated the India Pavillion for representatives from other countries, including the industry to interact with the participants and avail of information about India and the potential of its workforce. In fact, India’s unique demographic dividend stood out in the Minister’s address at a Summit of Government representatives from 40 countries where he made a strong case for the country as a hub for recruiting skilled and talented workforce across industries. Learning-on-the-job, an important pillar of the Skill India Mission that envisages creating a technically equipped workforce ready on take on the challenges of Industry 4.0, was the thrust of Dr. Pandey’s speech in which he highlighted the potential India held in a young and eager population. Dr. Pandey’s appeal drawing attention to this potential was met with a standing ovation by all countries.

Shri Rajesh Agrawal, Joint Secretary, Ministry of Skill Development and Entrepreneurship, who was at Kazan as an official delegate expressed his delight and said, “We are honored to see Team India bring home a Gold Medal, a Silver Medal, two Bronze Medals along with 15 Medallions of Excellence from WorldSkills 2019, Kazan, Russia. The youth of the country should take great inspiration from the commitment and the determination with which Team India defined new limits and proved their mettle against many nations like China, Russia, Japan and the likes. Congratulations to the other participants too for having embodied the true spirit of participation and giving it their best. All of them have shown that India has a young and competent workforce ready to define new limits.  I would also like to thank all the individuals and the corporates who were involved with the participants and made this win possible.”

Echoing similar sentiments, Dr. Manish Kumar, Managing Director and CEO, National Skill Development Corporation (NSDC), said, “ Congratulations to all the winners, especially to Aswatha Narayana, on winning India’s first gold medal. I thank the Ministry of Skill Development & Entrepreneurship, state governments and industry leaders for their support to Worldskills and providing candidates with the opportunities to excel in this competition. Special thanks to Mr. Sanjib Rout and his team at the CV Raman Institute, Odisha, for the role they played as an institution in bringing home the first gold medal for India. It is my hope that more institutions will come forward to support the next round of Worldskills competitions.”

Experts of the winners and the participants were an integral part of the competition and continued supporting the contenders in their respective skills. They played a critical role in Team India’s win and to achieve this milestone would not have been possible without their devoted involvement. S Aswatha Narayana who won Gold in Water Technology was trained by Rajat Kumar Samantaray, Professor, CV Raman Institute, Bhubaneswar, Pranav Nutalapati who won Silver in Web Technologies was trained by Ruchi Pareek, Technical Director, Smalt & Beryl, Sanjoy Pramanik won Bronze in Jewellery and was trained by Anupam Karmakar, Creative Head, Vummidi Bangaru Jewellers and Shweta Ratanpura who won Bronze in Graphic Designing, was trained by Narayanan Sathish, Founder, Design Media, Pune.
Posted by editor-manu-sharma at 5:59 PM